Mars, the planet of “war” makes closest approach to earth in 6 years

As we broadcasted earlier this week regarding the Grand Square and Cross of planetary alignment beginning April 23rd 2014, Mars ushers in it’s grand entrance and closest approach to earth in 6 years…just in time to greet the first blood red moon

A huge night for stargazers is nearly here: On Monday evening (April 14), Mars will make its closest approach to Earth in six years, just ahead of a total eclipse of the moon.

Mars will be at its closest to Earth since 2008 when the Red Planet comes within 57.4 million miles (92.4 million km) of our planet. While that close approach occurs during the daytime, at 8:53 a.m. EDT (1253 GMT), Mars will rise later in the southeastern night sky and shine throughout Monday evening as a sort of night sky preview for the first total lunar eclipse of 2014 early Tuesday (April 15).

You can watch live webcasts of Mars and the total lunar eclipse on Space.com, courtesy of the Slooh community telescope, NASA and the Virtual Telescope project. The Slooh Mars webcast will begin at 10 p.m. EDT (0200 April 15 GMT), with several lunar eclipse webcasts following at 2 a.m. EDT (0500 GMT) on Tuesday.

Editor’s Note: If you snap an amazing picture of Mars or the total lunar eclipse, you can send photos, comments and your name and location to managing editor Tariq Malik at spacephotos@space.com.

How to see Mars at its best

On April 8, Mars was at opposition to the sun, meaning it was on the opposite side of Earth from the sun — a celestial alignment that occurs every 26 months. The past several years have been lean ones for Mars observers. 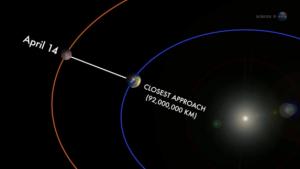 This NASA graphic shows the positions of Mars and Earth on April 14, 2014, when Mars will be within  …

Those who witnessed its spectacular 2003 Mars approach, which brought the planet within 34.6 million miles (55.7 million km) of Earth, have had to settle for increasingly poorer views of the Red Planet as the Earth-Mars orbital geometry became more unfavorable. But that trend is ending with Monday’s event, Mars will make its closest approach to Earth since Jan. 3, 2008.

And yet, despite the improvement, this is still below-average in terms of favorability. Currently, a 6-inch telescope with an eyepiece magnifying 118-power will show Mars’ rust-hued disk appearing as large as the full moon appears with the unaided eye and yielding detail only grudgingly. Even so, observers may be able to spot new features in the light and dark markings that cover the planet’s surface.

On Monday at 2 p.m. EDT (11 a.m. PDT/1800 GMT), the moon will pass 3 degrees south of Mars, an invisible event because the Americas will be in daylight and the moon and Mars will be below our horizon.  When they first appear in the east-southeast sky later that evening, they will have noticeably separated; the moon having moved on to the east, closer to Spica en route to its rendezvous with the Earth’s shadow.

Finally, at 8:45 p.m. local daylight time, compare Mars with the brightest star in the sky— the bluish Sirius (in the south-southwest) — when they stand at equal altitudes. The Observer’s Handbook of the Royal Astronomical Society of Canada says both will shine at the same brightness, a magnitude -1.5. Which do you think appears brighter?

Mars would likely garner most, if not all, of the attention on Monday night if it were not for the total lunar eclipse following soon afterward. But the Red Planet’s close proximity to the soon-to-be-darkened moon will no doubt have not a few people asking the question: “Just what is that fiery-colored object that’s glowing high above the moon?” So at least in a literal sense, Mars will “top” the moon on Monday evening. 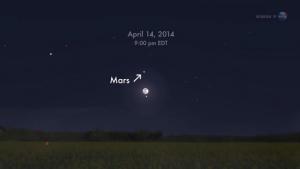 This sky map shows the location of Mars and the moon in the southeastern night sky on April 14, 2014 …

Mars aside, the moon is poised to wow observers across most of North America with it is eclipsed by Earth’s shadow between 2 a.m. EDT and 5 a.m. EDT (0600 to 0900 GMT) on Tuesday morning. [Total Lunar Eclipse of 2015: Complete Coverage]

This entry was posted in Blog, Featured.

Warning: count(): Parameter must be an array or an object that implements Countable in /home/fireofth/public_html/wp-includes/class-wp-comment-query.php on line 405


Warning: count(): Parameter must be an array or an object that implements Countable in /home/fireofth/public_html/wp-includes/class-wp-comment-query.php on line 405